Shares of electric vehicle maker Lucid Group (NASDAQ:LCID) were moving sharply higher on Tuesday, after the company reported third-quarter earnings and confirmed its production plans for next year.

Lucid reported on Monday afternoon that it lost $524.4 million in the third quarter, or $0.43 per share, on revenue of $232,000 as it prepared to start production of its innovative Air luxury sedan.

Those numbers fell short of Wall Street's expectations, as analysts polled by Thomson Reuters had expected a loss of $0.25 per share on revenue of $1.25 million. But electric vehicle investors didn't seem concerned about the "miss," in light of what was arguably much more important news: Lucid confirmed its plans to build about 20,000 vehicles next year. 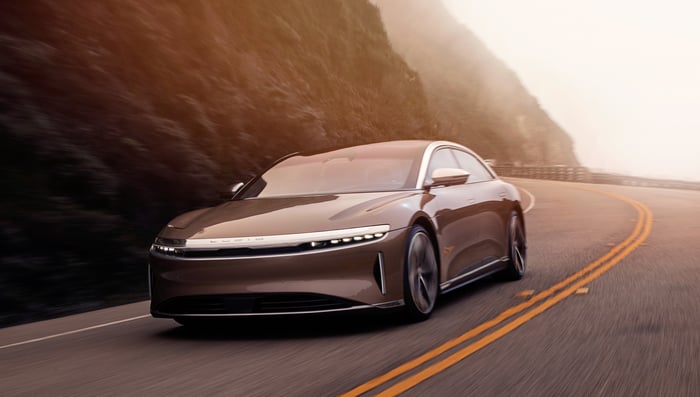 Production of the Lucid Air began in late September, with the first deliveries to customers in October. Image source: Lucid Group.

That number came with a caveat, as CEO Peter Rawlinson said that ongoing global supply chain disruptions could throw a wrench into Lucid's production plans. But, he said, the company has taken steps to mitigate potential supply risks, and as of now it expects to hit its production target and launch three more versions of the Air sedan by the end of next year as planned.

Lucid didn't offer financial guidance for the current quarter, an understandable decision given that deliveries of the Air sedan just began last month. But in addition to confirming its production target for next year, it said that it has begun an expansion of its Arizona assembly plant that will increase its capacity from about 34,000 vehicles per year now to about 90,000 vehicles per year by the end of 2023.This article represents the opinion of the writer, who may disagree with the “official” recommendation position of a Motley Fool premium advisory service. We’re motley! Questioning an investing thesis -- even one of our own -- helps us all think critically about investing and make decisions that help us become smarter, happier, and richer.