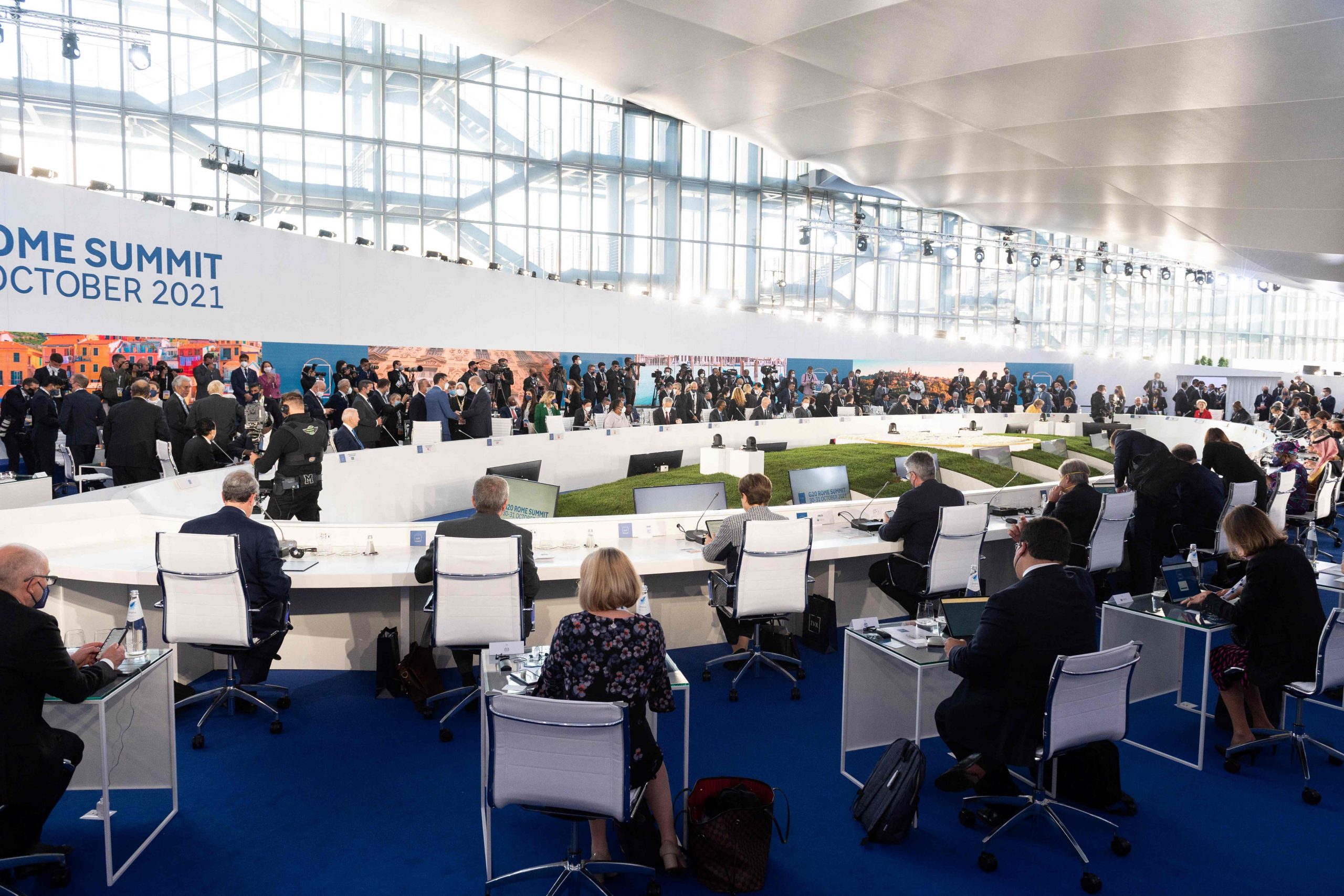 PARIS: As nearly 200 nations gather in Glasgow for the UN climate talks starting on Sunday all eyes are on Rome, where a G20 summit ending the same day will signal how committed the world’s major economies are to curbing global warming.

Never has climate change figured so prominently on the G20 agenda, and never have leaders hopped straight from a G20 to a climate summit: more than 120 heads of state and government are expected at the outset of COP26 in Scotland.

“The G20 is going to be very important for COP26,” said Helen Mountford, vice president for climate and economics at the World Resources Institute.

“The idea is to get very clear and strong pressure signals from the leaders on what they plan to do, both individually and collectively,” she told AFP.

Climate negotiators, CEOs, policy wonks and NGOs at the 13-day climate talks will parse the G20 communique for signs of where COP26 might break down or see breakthroughs.

No measure of success at COP26 looms larger than capping the global warming at 1.5°Celsius below pre-industrial levels, a threshold only a few tenths of a degree away.

“We want to be able to say with credibility coming out of Glasgow that we have kept 1.5°C within reach,” UK minister and COP president Alok Sharma told journalists by Zoom this week. But that means slashing global emissions nearly in half by 2030 and to “net-zero” by 2050.

“We are far from the mark. Recently updated carbon-cutting pledges, known as nationally determined contributions, or NDCs, would still see global temperatures rise a ‘catastrophic’ 2.7°C, according to the UN.

“We need sharp emissions cuts within this decade,” said Rachel Cleetus, policy director for climate and energy at the Union of Concerned Scientists.

G20 countries that have not stepped up with stronger near-term carbon cutting pledges, Australia, Japan, Brazil, Russia, Saudi Arabia, “are likely to be among those least enthusiastic” about a strongly worded commitment to 1.5°C, she told AFP.

China, by far the world’s biggest carbon polluter, plans to make its economy carbon neutral before 2060, but has also resisted pressure to deepen near-term ambition.

The cornerstone temperature goal in the 2015 Paris Agreement, China points out, is “well below 2°C” , the 1.5°C goal was purely aspirational, even if it has since become the de facto target.

Beijing’s revised climate plan, submitted to the UN on Thursday, repeats a longstanding goal of peaking emissions by 2030.

“There’s no way to be on a trajectory that’s consistent with 1.5°C by 2030 unless China does a lot more in this decade,” said Alden Meyer, a senior associate at climate and energy think tank E3G.

India; meanwhile, argues that if net-zero by 2050 is the global goal, then rich countries should be carbon neutral 10 years earlier to allow poorer, emerging nations a larger carbon allowance and more time to develop.

A best-case scenario, experts say, would be a G20 communique that calls for ramping up emissions reductions in the coming decade, setting 2023, when a Paris Agreement ‘stocktake’ is to take place, as a deadline for hard numbers.

“Worst case would be something squishy that doesn’t emphasise near-term 2030 action, but focuses more on long-term net-zero goals,” said Cleetus.

G20 finance ministers this summer gave a nod for the first time to carbon pricing as a potentially useful tool in the fight against climate change, but going beyond that has proved hard.

“A major breakthrough is unlikely, the political will is not really there,” said Meyer.

In 2009, the G20 pledged to “phase out over the medium term inefficient fossil fuel subsidies” that encourage wasteful consumption.

Twelve years later; however, subsidy levels remain in the hundreds of billions of dollars per year.

Proposals by Italy and the United States to set up timetables for action have met stiff resistance, notably from Russia and Saudi Arabia, according to observers.

When it comes phasing out coal, the picture is mixed.

Chinese President Xi Jinping’s announcement in September that China would stop financing new coal-fired power plants abroad was widely welcomed, and deepens a global trend that the G20 could endorse.

But when it comes to winding down domestic use of coal, positions are sharply divided, which means a forceful call in the communique to end coal is highly unlikely.

The US, Canada and EU nations favour a rapid phase-out. China, India and Indonesia; however, continue to expand coal-fired energy capacity.