Earlier this year, when California Gov. Gavin Newsom was searching for the right message to convince disengaged Democrats to vote against the effort to oust him in Tuesday's recall election, it would have been impossible to imagine a more perfect foil than conservative talk radio host Larry Elder.

In this deep blue state where registered Democrats outnumber Republicans nearly 2 to 1 and only one governor has successfully been recalled, few progressive voters had viewed the recall of their governor as a real possibility until late July, when the polls tightened. The Delta coronavirus variant was taking hold, angering many vaccinated Californians, who had thought the worst was behind them. And Elder, who had announced his candidacy earlier that month, emerged as Newsom's chief opponent, promising that one of his first acts would be to eliminate the governor's mandate for state workers to get vaccinated or else face weekly testing.
Many Democratic voters in a state that President Joe Biden won by nearly 30 points had not engaged or paid much attention as Newsom made an amorphous argument that the recall was an attempted Republican takeover by acolytes of former President Donald Trump and a symbol of the enduring hold of "Trumpism."
But in Elder, Newsom gained a direct target who he could argue was "to the right of Donald Trump" and who would take California "off the Covid cliff," citing the experiences of Florida and Texas and their conservative anti-mask-mandate governors as the model Elder would follow in responding to the pandemic. Elder's long history on the radio and as a columnist provided reams of controversial statements for opposition researchers and journalists to scrutinize on other topics, like his disparaging comments about women -- a key demographic for Newsom.
The sharp contrast between Newsom and Elder, specifically on managing the virus, allowed the Democratic governor to crystallize the choice for his party's voters. He sounded the alarm that because of California's unusual recall rules, it would take a majority to recall him on the ballot's first question, but that if that effort succeeded, his replacement could be chosen by a small fraction of voters. (On the ballot's second question, voters are choosing from a list of more than 40 candidates, and Elder has maintained a wide lead within that field).
Elder's threat changed the Newsom strategy -- and the trajectory of the race.
"There was a growing sense amongst political insiders that the anti-recall campaign's focus on Donald Trump as the evil force we had to defeat was losing traction," said Democratic strategist Darry Sragow, who is the publisher of the California Target Book, which tracks election and campaign finance data in the state. "Then his alter ego shows up in a state where Donald Trump got about a third of the vote. ... Somebody smiled on Gavin Newsom and presented California voters with the opportunity to listen to Larry Elder."
The Covid contrast
California Democrats were aghast once they began hearing Elder's past remarks about women, his endorsement of pregnancy discrimination, his opposition to abortion rights and the minimum wage, and his skepticism of the climate crisis, among many other topics.
But Democrats recoiled most virulently from his views on Covid and his opposition to mask and vaccine mandates -- positions that are sharply at odds with the majority of Californians, including many independents and some Republicans.
At the same time that Covid cases in children were growing at an exponential rate and hospitals in some Southern states were once again filling up with unvaccinated patients, Newsom was able to spend millions on television ads making the case that voters faced a "life or death" choice in the September 14 election. 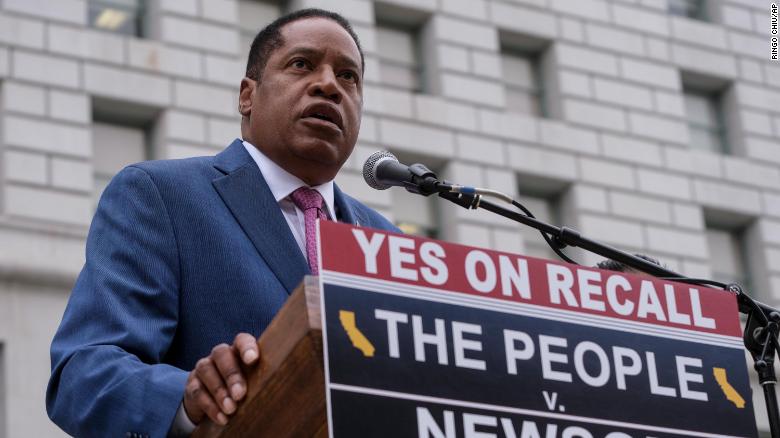 "After all the years of hardcore far-right things that Larry had said, that reinforced the threat of what he was saying about Covid," said veteran California Democratic strategist Bill Carrick. "Everybody believed he meant it."
Anne Dunsmore, the campaign manager for the pro-recall group known as Rescue California, said Newsom's effort to villainize Elder halted some of the momentum that she had been seeing for the recall effort among voters of all political persuasions: "He was unsuccessful to that point painting the picture around a face -- 'Here's the face of what you're going to have if you don't elect me,' " she said. But with Elder, she added, Newsom "cast major fear upon the electorate."
Newsom acknowledged Saturday that Elder had helped galvanize and grab the attention of Democrats who might have otherwise skipped the election, calling him "extreme even by extreme standards."
"So I think people certainly have woken up to that," Newsom told reporters at a campaign event in Oakland. "Larry Elder certainly makes the contrast with this campaign, this candidacy, much easier to express."

🔖Tags: among many other topics and his skepticism of the climate crisis California Democrats were aghast once they began hearing Elder's past remarks about women his endorsement of pregnancy discrimination his opposition to abortion rights and the minimum wage
Share on Facebook
Share on Twitter
PreviousUS spent $290m every day in Afghanistan for 20 years
NextAnalysts explain how the Apple-Epic court ruling could affect Google