Public Enemy has apparently run into irreconcilable differences — but they’re not over Sen. Bernie Sanders of Vermont.

The group relieved Flavor Flav of his duties Sunday, after he sent a cease-and-desist letter to the Sanders campaign on Friday, asking that the presidential candidate clarify that Public Enemy wasn’t playing at a Sanders rally and a recent endorsement by Chuck D was from the rapper alone, not from Public Enemy as a group.

“Sanders has promised to ‘Fight the Power’ with hip hop icons Public Enemy — but this Rap Icon will not be performing at the Sanders Rally,” said the letter from Flav’s attorney. 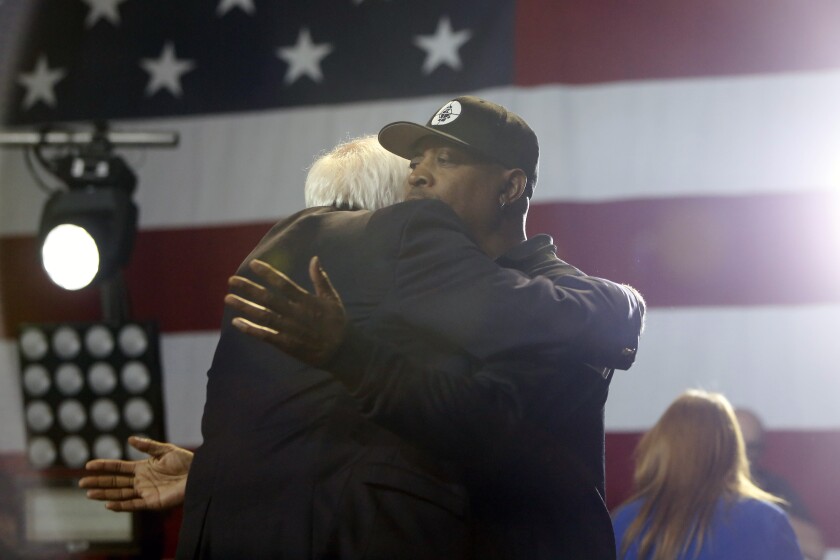 “To be clear Flav and, by extension, the Hall of Fame hip hop act Public Enemy with which his likeness and name have become synonymous has not endorsed any political candidate in this election cycle and any suggestion to the contrary is plainly untrue.”

The letter noted that Chuck D was free to have a political voice but said that the rapper’s voice alone was not the voice of Public Enemy.

Public Enemy and Public Enemy Radio, an offshoot led by Chuck D and featuring DJ Lord, Jahi and the S1Ws, concisely announced that they would be “moving forward without Flavor Flav” in a statement Sunday to Rolling Stone.

In a group statement Monday, Chuck D, DJ Lord, Jahi, James Bomb and Pop Diesel said Flav’s political views had nothing to do with his dismissal.

“Flavor Flav has been on suspension since 2016 when he was MIA from the Harry Belafonte benefit in Atlanta, Georgia. That was the last straw for the group. He had previously missed numerous live gigs from Glastonbury to Canada, album recording sessions and photo shoots. He always chose to party over work,” they said.

They noted that Public Enemy Radio had performed numerous shows since then without Flav.

“While Public Enemy Radio was moving forward, Flavor Flav was starring on the reality show ‘Growing Up Hip-Hop New York,’ where an episode featured his children discussing an intervention and putting him in rehab. It’s time to move on and everyone wishes Flavor well.”

But the war of words between Chuck and Flav was still out there on social media.

Toyota pulls Suzuki firmly into its orbit through stake deal

Coronavirus and chloroquine: Is there evidence it works?